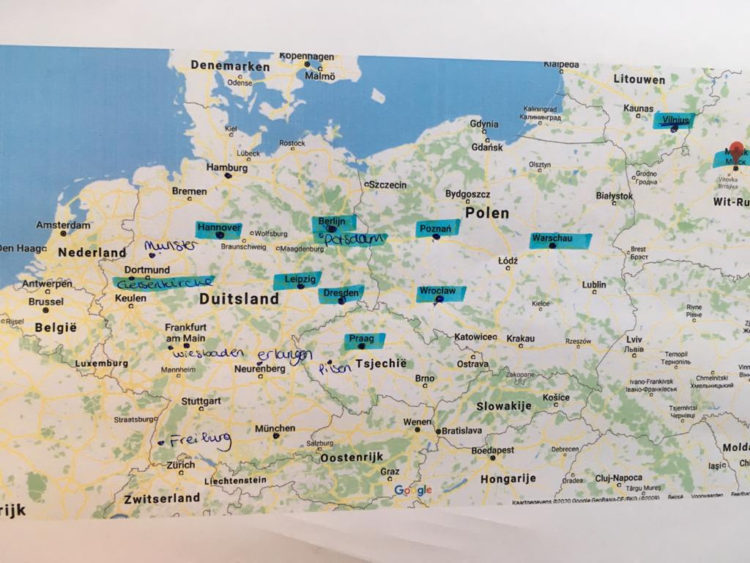 From Antwerp to Antwerp via Minsk (letter and conclusion)

Letter send to a number of theatres and programmers along the way between Antwerp and Minsk, inviting them to programme Song for Gigi and/or collaborate in a case-study that questions the desirebility of generalized idea of internationalization and artist mobility.
This letter below is followed by our letter conclusions of this practical investigation and the preceding mail correspondence with TEART Festival in Minsk, in response to the invitation to present Song for Gigi at the festival in September 2020.

Dear, It’s been a while since we were last in contact but there is a good reason why I write to you today with a straightforward question.

I recently received an invitation from TEART festival in Minsk to perform my theatre show Song for Gigi (detailed information below and attached) in the next TEART edition in September 2020.

I would like to say yes to this invitation.
However, the distance between my home base Antwerp and Minsk is some 2000km and my crew and me do not travel by flights, never, no exceptions made, not even for a tempting invitation like this one. Instead, we choose to do our travels slowly, usually by train. In this case however, we would like to drive all the way to Minsk, transporting the set and crew in one vehicle on the condition that we can make 3 extra stops along the way. Touring my work is very important for me as a theatre maker and performer, although not at every cost. Ecological considerations are a driving force in questioning my ways of producing and of showing my work. My practice has evolved because of this, towards smaller works that can escape the common conditions and expectations of touring and the underlying assumption one should be able to show one’s work at any given time, at any given place. From this perspective, it is clear that unless we can present Song for Gigi (detailed information below and attached) in 3 extra venues/festivals along the road to or from Minsk, the whole venture From Antwerp to Antwerp via Minsk would be an irrational and irresponsible undertaking in terms of production and sustainability.  So, we wondered, would it be possible to convince at least 3 programmers with venues or festivals along the way between Antwerp and Minsk to present Song for Gigi in mid september 2020? Is it possible to establish an exchange on this, and reach an outcome even this last-minute (to regular standards)?  As such, this has become an investigation which we want to include you in. Hence my question to you: Would you consider showing Song for Gigi to your audience next September and give your support to an alternative way of touring? And, if you share and support this perspective, would you be willing to contribute to this investigation on how to make this possible, for instance by involving other programmers or sharing this request with colleagues of yours that might be supportive of this idea in other cities and venues along the way? Even if you see no possibility of becoming one of the three stops along the way, it would be very appreciated if you would collaborate to our research, by responding with your thoughts on the matter. We look forward to hearing from you soon,Many thanks in advance for your kind collaboration, Benjamin

As promised, we made a major effort to find 3 extra stops along the way to Minsk, in order to be able to present Song for Gigi at your Festival end of September 2020. This critical condition was not just a matter of common sense, but rather born out of a more profound guiding principle in Benjamin’s practice that touring doesn’t necessarily mean taking planes and shipping sets but can also imply a slow approach, even when the distance to cover is 2000km one way and the crew is more than a handful of people.

The state of the natural world being as it is, choosing consciously not to turn a blind eye to the impact of our current production and distribution mechanisms, is a matter of courtesy. So, we embarked on an inquiry which led us to address a list of about 20 theaters and festivals (in The Netherlands, Germany, Poland, Czech Republic, etc) that appeared widely on the road map from Antwerp to Minsk.

With our letter ‘From Antwerp tot Antwerp via Minsk’  we managed to activate a professional netwerk – of old and new connections, known and unknown contacts, big and small cultural houses – asking them support this slow alternative for touring and requesting their collaboration in finding three more opportunities for Benjamin and his crew to show Song for Gigi along the way. Cities where we contacted at least one programmer are Den Bosch, Düsseldorf, Hamburg, Hannover, Munster, Potsdam, Berlin, Frankfurt, Leipzig, Jena, Warschau, Sczescin, Poznan, Vilnius.

Two out of three necessary opportunities came through until now. Lodz (Poland) and Riga (Latvia) are both positively welcoming us and willing to include Song for Gigi in their programming. The downside being that Riga is actually not on the way but about 500km further up North and 2 weeks earlier than your festival.

A number of contacts effectively made the effort to check the options but didn’t find a match – time wise or for other reasons. Many replied, suggesting names of other colleagues to approach. Some haven’t reacted yet. They might still, but for now that remains a cry in the dark.

So, this is the outcome in numbers at this moment.

But the outcome that matters just as much, and perhaps even more at this point, is that the many reactions were without exception positively appreciative and encouraging of the gesture of the proposal itself. One could say that, even if they didn’t give us a yes, the feedback we received expressed some kind of gratitude for being reminded about the urgency of questioning the generalized idea of internationalization and artist mobility being desirable, though it is equally problematic.

Taking all the above into consideration, and realizing that the deadline you gave us has passed, the conclusion is that unfortunately Benjamin Verdonck’s show Song for Gig cannot be part of your festival program. We do want to thank you again for the kind invitation.

We are currently preparing for the première of Benjamin’s new show ‘The Tiger eats the zebra and the bird, alarmed takes off’ on Saturday but I hope we can continue our conversation soon after.

Also on behalf of Benjamin,

We would be very grateful, if your side can manage to negotiate the dates and confirm the participation in the festival till 16 February.

Thank you very much for your understanding!

With best regards from Minsk,

We’re still researching the option and are now working with the time window you propose below. This is a slow process, as you probably can imagine. Of course we realize we can’t keep you waiting indefinitely so we’d like to hear from your side what would be the deadline for us to confirm the invitation for Gigi.

Thank you very much for your answer and your efforts in the attempts to make this tour happen!

We appreciate it very much!

We thought about possible partners with whom, we can share the idea of this project, and unfortunately in this period (mid September) we can’t find any programmers: their festivals either after TEART, or much more before.

But we keep our fingers crossed that some programmers from your contacts will be eager to participate in this tour.

In order to make this tour happen, maybe there are some Belgium institutions, which provide financing for such a tour, to which your side/our side can address to? Apply for some grants?

Meanwhile, as our festival is already fixing the dates with other participants, we would like to inform you about the possible time frame for the performance “Song for Gigi” in Minsk: 24 September – 28 September. Please let us know, what do you think about this time frame?

Please keep us updated regarding the answers from other programmers. Do you have the deadline, when you hope to receive all answers?

With best regards from Minsk,

First our very best wishes for the New Year!

I come to you with an update on where we stand with your invitation. We have been silent for a while but we’ve also been busy working on ways to make the trip happen.

Below and here you can find the letter which we are sending to some 30 programmers and venues along the way from Antwerp to Minsk, inviting them to collaborate in making this happen / think along in how to make this happen. Your invitation and questions prompted Benjamin to turn this question into an actual project, a way of reflecting on the question of touring, which is very important to Benjamin but not at every cost.

Up till now we’ve received very appreciative and helpful responses with suggestions and feedback. It’s not sure at all if eventually we can add 3 stops along the way but we’re working on it and we’d like to ask you to join us in this effort by sending out this letter to some other of your contacts, which you consider positively aware of the matter and perhaps willing to reach out.

So, to conclude, yes, we definitely still want to make this happen and we’ll keep you posted on other opportunities as they arise.

Looking forward to hear your thoughts,