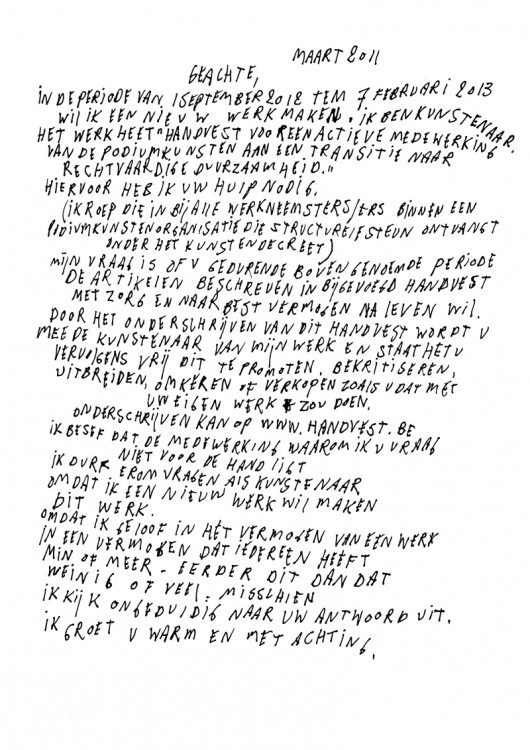 Verdoncks continuous movement towards an ‘outside’, to what lies outside of art, outside the theatre, in the city, in the world, and back again, is playfully summarized in his Handvest voor een actieve medewerking van de podiumkunsten aan een transitie naar rechtvaardige duurzaamheid (Manifesto for an active collaboration on the transition towards fair sustainability by the performing arts) (2011). This manifesto goads the arts sector into taking action for a sustainable life while the reactions to his manifesto, in turn, lead to a new art project.

the creation of the work of art begins on September 1st, 2013
at the start of the new theatre season
and ends on February 7th, 2014
160 and a half days later
in the middle of the same theatre season

the participating organisations are then asked not to serve
any meat or fish dishes
in their staff canteen on the other days of the week
any employee having a meal out of the office while on the job
will also abstain from consuming any meat or fish, except on thursdays

after the start of the work of art
all promotion material deemed necessary
for productions premiering within the stated period
will be printed in black letters on unbleached recycled paper
the share of the communication budget saved this way
will be used collectively at the end of the stated period
to rent one or more billboards
on which will be written on a white background
in upside-down black letters:
we agreed on everything